Life has been good recently, I have been to many a place beginning with the letter B. Bataan, Burdeos and now Bohol!

I didn’t know what to expect, apart from Tarsiers and Chocolate Hills.

We flew out Friday afternoon from Manila and the flight with Air Asia arrived at Tagbilaran earlier than expected. It was a nice flight and our hotel itself was only a 20-minute drive from the airport. I love the fact that the airport is so small, that you get off the plane and are outside within a minute!

On the first day, we roamed the center of Tagbilaran and did what we always do while away, go to Jollibee, haha! We walked around the park near the cathedral which is one of many in Bohol inspired by Spanish architecture. As can be seen, by the pictures, great effort has been made to make this place of worship look wonderful. Bohol itself is rather religious and there is a ban on nightclubs, bars and ‘seedy’ joints. This really made me respect Bohol, as they are willing to give up revenue from such ventures to preserve their culture and protect their society. 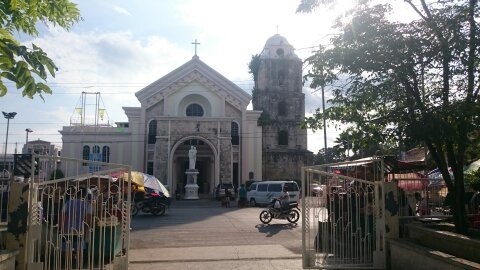 In the evening we decided to eat at our hotel and ordered fresh crabs and calamari, although we kept debating whether it was calamari or Calamares! I am sticking with Calimari. It was an evening of good food and good songs. The best song for me was, ‘Balik, sa Bohol, Balik’. This was sung a few times during our stay but no one could top the guy on the first night.

The second day is when we upped our activity levels. We met with our driver, who took us to so many places and sites, it was a pretty end to end day. Our guide was fantastic and educated us with so much information.

Firstly he took us to see the preserved version of a 140kg Python! I’m glad it wasn’t alive. I got to feel some snakes and the current python they have which is trained not to attack. However, I understand how these snakes can be such … snakes! They either camouflage or they can allure you with their skin. While you’re mesmerized by their skin, they silently make a move. I made sure I got my ass out of there as soon as I saw that.

Next was one of our highlights, we drove a buggy on a trail beside the Chocolate Hills. The hills themselves are perfectly formed, but once upon a time they weren’t! However, the rain dissolved any ‘salt’ which have given these hills even sides. I believe there are 1200 of these hills. They were previously called the Carmen Hills, however back in the day, when an American visited and saw the color of these hills, they got renamed to Chocolate Hills. We didn’t visit in the Summer, which is where these hills turn all chocolatey. It was great driving the buggy, however, I let my girlfriend drive, at first she didn’t do too well so the guide advised her not to drive as we were approaching a residential area. On the way back I insisted that she drove for a while as I wanted her to share the experience. She was actually doing well until we crashed into a parked lorry, I was shouting stop, but she was pressing accelerate. The owner of the lorry saw that no damage was done so let us go. He showed no anger at all, he was actually very calm about the whole situation. The buggy itself was damaged, however, the owner of the buggy was also incredibly forgiving. He was obviously a little shaken by it, but he saw that there was no mechanical damage, only a few dents which could be sorted out. 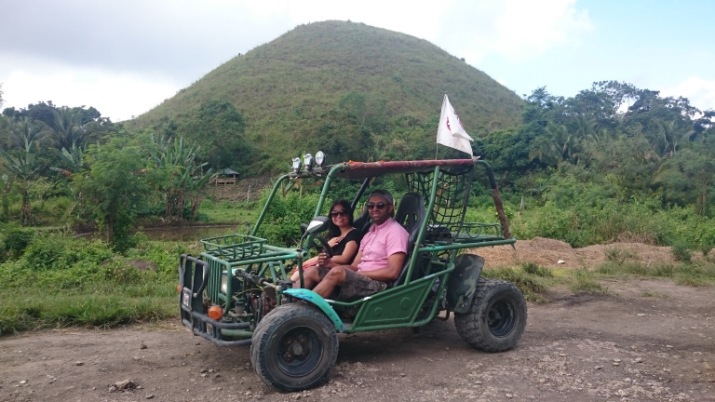 This is a good point on which to talk about the wonderful people in Bohol. Now, this isn’t some case of having a few days away and meeting ‘nice’ people, who are only nice because you bring money to the table. The people in Bohol are genuinely nice people. They would wait for you, advise you and direct you. Honestly, a few days removed from there and I do miss that. I also found the charges from the Tricycle drivers to be low compared to Manila.

Anyway back to the events on day one. Our guide took great pictures and after the hills, we saw some of the rice fields. The views were stunning.

We were then ushered to a viewpoint for the chocolate hills. I’ll let the pictures do most of the talking, but at this point, I felt truly grateful that I am able to travel and view this beautiful landscape.

A visit to the butterfly farm followed, which I don’t remember too much apart from the wooden Duyan! Boy, I love my Duyans.

Next, however, was another highlight, the Tarsier area. This is an endangered species, I am stunned that I got to see such a specie! They are the size of a fist. For them, Bohol is the perfect environment as it has a rainforest type climate where it always tends to rain in the afternoons. Take these Tarsiers out of this environment and they will commit suicide! Their features are so mixed, they have a similar tail to a rat, eyes similar to an owl and ears similar to a monkey to name a few. They are a nocturnal species too.

We were getting hungry or in my case Hangry! We ended having a buffet at the beautiful Loboc river. I didn’t expect there to be a boat ride. The boat itself is actually moved by a smaller boat! The food was decent, our Guide knew my dietary restrictions and made me some soup with some organic vegetables. We stopped to view some traditional Filipino dancing. I tried Tinikling again, but the steps were different to the ones in Bataan, which completely caught me off guard. I ended up tripping over the sticks! I also joined in and played the ukulele too. The views were great and they played a request for us, you guessed it, Balik sa Bohol, Balik, Balik! Balik! 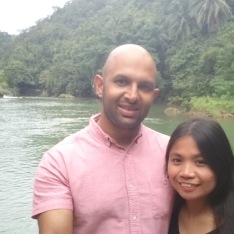 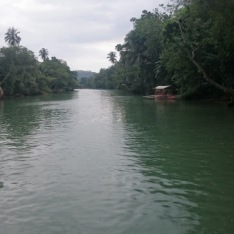 The first thing I noticed about the river is how clean it was, this actually is something that runs throughout Bohol. You will hardly see a piece of litter on the streets and they have a recycling scheme. Prior to visiting Bohol, I was thinking that the Philippines really needs to become more responsible in terms of the impact their waste refusal or lack of, is having on the environment. In Manila, seeing rubbish on the streets is the norm, in fact even in some tourists spots you see rubbish. The Philippines as a whole should adopt the system Bohol has in place.

That was a great day, however, there was still more to come the next day where we met our driver 5:35am. We were going to Panglao Island to meet some boat drivers. I loved being on that boat. I sat on the side with my shades on, and beard on. I kind of felt like Alan Sugar on the intro of the Apprentice. A rich guy enjoying the high life, even if it was just for a while. My girlfriend asked me if I was happy, I said I am easily pleased because I am very grateful to be able to do this.

We ended up viewing some Dolphins for a while and let’s just say we kept saying wow! Yet another experience where I felt so grateful. The dolphins were swimming in groups and in one instance I saw one jump so high while flicking the back half of its body. I didn’t capture it on camera, but it’s etched in the memory.

Our boat took us to Balicasag which is a small beach. This is where we partook in Scuba diving and I must say I truly enjoyed this experience. I have never seen so many beautiful fishes, corals, formations and I love the color of the water here. It felt great to be alive at this point. I actually lost a bracelet and the boat driver dived down and got it for me. What a legend. I complimented the boatman as he had a very good body. I imagine it’s from all the rowing and diving that he does.

The final stop for our boat ride was at Virgin Island. Some call it the mini Boracay, because of its clear sands and waters. Fortunately, there was no nightclub scene here unlike Boracay, if anything there was a wonderful church here where you walk in from the beach into a church built on the sand. The floor itself isn’t covered, it’s a continuation of the beach. The beach is well maintained and beautiful.

Once we got back to Panglao we visited the Bohol Bee farm where we had a fancy lunch with a view. It’s the first time I have ever had Red Rice and let me tell you it is very filling. The dishes were well presented, and I really enjoyed the Buko Shake! 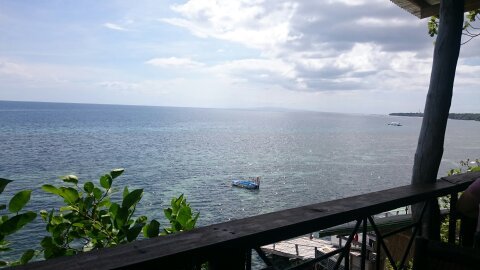 The view at lunch

Bohol is the type of place where it really gets quiet in the evening. After 6pm, the streets are pretty quiet. Even during the day, it’s quiet. The people are proud that their place is safe. I think there are good people in Manila too, however, in Bohol people don’t have any worries. Even foreigners can be seen in places that you wouldn’t see foreigners in Manila. Like the hoods, or the areas where the Filipinos live. Which is seen as a sign of safety.

But then again, why are we surprised? Bohol is shaped like a heart after all!

For your inquiries and reservations, contact us at the following or use the Contact Form in the Contacts Menu. 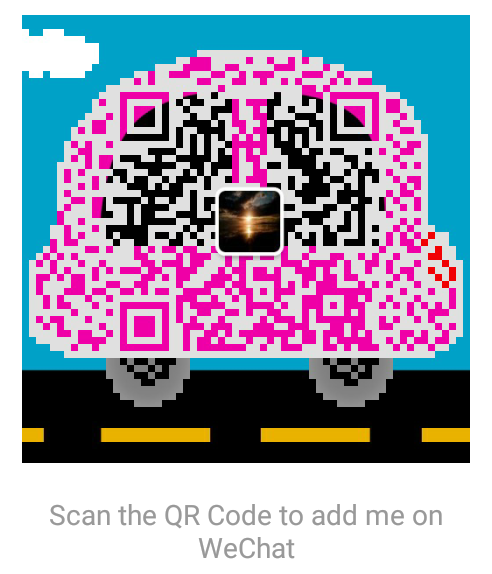 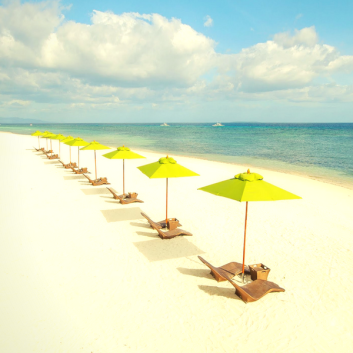 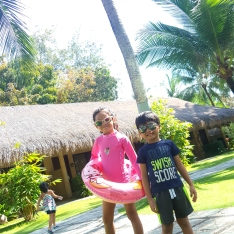 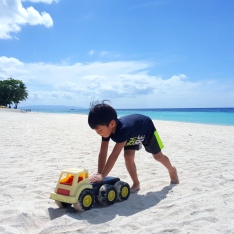 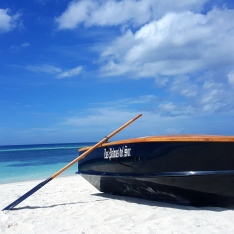 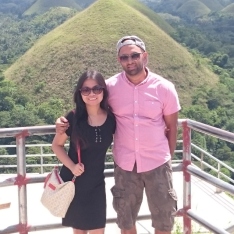